Everything's been a bit broken round here lately, which is partly why I haven't been around for ages, because amongst other things my internet connection decided to die. It's back now (obviously) and so am I ... except that I'm on the cusp of a hospital admission :o( In fact my consultant wanted me in today from clinic, but I couldn't because I was looking after my dad today, so as a temporary measure the Dr H put my prednisolone up to 150mg!!! I'll be going in tomorrow ... provided I don't splat completely in the night. W is on night-watch - bless her, she's wonderful - and will either take me up to the hospital tomorrow or follow me to A&E if I end up there through the night, which I'm hoping I won't. I don't think I will, but I've been wrong before, as we all know.

Actually, before I go up to the hospital tomorrow I have to go to a GP appointment because I've been breaking in ways other than my lungs and my blood results came back today. It's all a bit long to give a blow-by-blow account, but to say that I've been passing out/nearly passing out rather a lot and have had various other random symptoms. After a series of appointments and blood tests it turns out that my anaemia has got worse again and that my ferritin levels are low, although the receptionist didn't tell me how low. Anyway, I have to go for an 'urgent' appointment tomorrow morning, which means that there's a slight risk that the GP will be freaked out by my lack of ability in the breathing department and will want to send me to A&E before I get a chance to get up to Freeman. I'm hoping not, and the fact that my consultant is expecting me to call should help prevent the risk of despatch to the General Hospital where A&E is. Let's hope that the GP trusts me to get myself sorted with my lungs and that she can sort me out with regards the anaemia and low ferritin. The problem, as we discovered before, is that there doesn't seem to be any preparation of iron supplement available that doesn't contain something that I'm not allergic to (are there too many negatives in that sentence for it to make sense?), and the pharmacist suggested that the only solution might be to see if it's possible to have a preparation made up especially for me, but this would cost £70 - £100 a time and so would probably require PCT funding. I suspect that's a long and complicated process, but I can't keep on passing out and collapsing in a heap so something's going to have to be done.

So that's a quick update from a slightly broken person who had a broken internet, but who now has a mended internet and is hoping to get mended herself very soon.

I'll be back soon with more of an update, more info and hopefully more breath.
Posted by BeckyG at 23:33 2 comments:

Cathedrals and the bishops

Sorry for the long absence since my last post. It's been a combination of being busy, some days not feeling 100%, and working on some of the photos I've wanted to put up here. So the next installment of my holiday in Somerset ...
After W and I had been to Wookey Hole we took ourselves to Wells, which is only about 2 miles away. It's a lovely little city, with some very old buildings that look a bit drunken, propping each other up along the edge of the street, but just off the main street (at least the main street that we found) and square are two buildings that are far more stately in their presentation. The first is the Bishop's Palace, which has been home to the various bishops of Bath and Wells of the past 800 years. 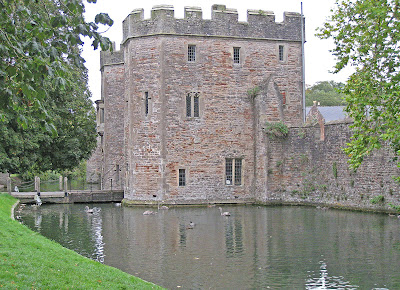 This is the moated entrance to the grounds of the Bishop's Palace. You can just see some cygnets on the water, and I read in the palace that the swans on the moat/river learnt many, many years ago to ring a bell that's attached to the wall and be fed by the occupants of the palace. The swans have passed the skill down from generation to generation so that apparently they still ring the bell for food even today, though I have to say that we didn't witness this. 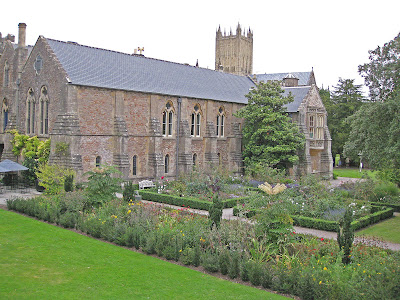 And this is the side view of the palace and one small section of it's lovely gardens. You can see it's proximity to the Cathedral by the Cathedral's tower peeking over the top, but I'll come to that in a mo. The gardens of the Bishop's Palace are lovely, and although it was wet we had an amble around and enjoyed the atmosphere. There were a number of sculptures in the gardens that were part of the Somerset Arts Festival, so we took our time looking at some of them, and there was one that I particularly liked of three swans in flight ... 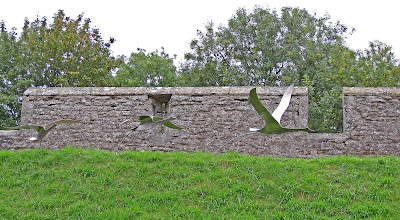 It's not the clearest photo of them, but it gives an impression. There was something very pleasing about the simple lines and the gleaming metal that reflected the grace that these birds have.

Going back from the palace into the market square, and then almost doubling back on yourself through a little arch way in the corner you follow a path for a short distance and come face to face with this ... 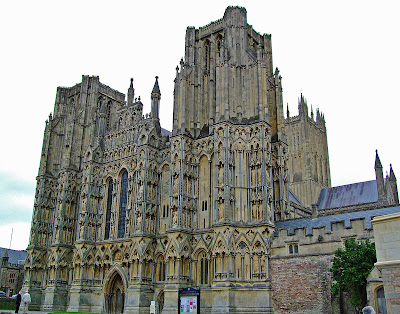 The Cathedral. It's quite an awe-inspiring sight, and you need some time outside it just to take in it's size and splendor. However, as you'd expect in a building of such grandeur on the outside, there are some wonderful sights to take in on the inside too. 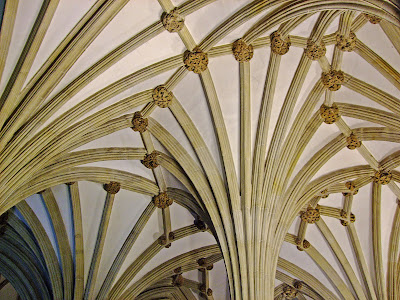 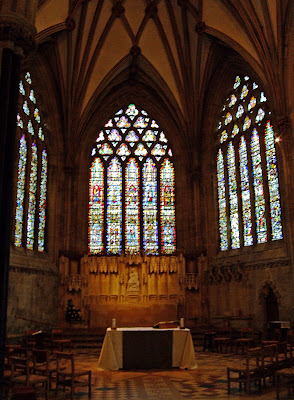 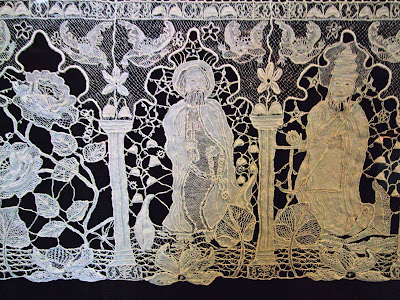 This is a detail of some lace work that's at least a few hundred years old, so far as I remember. It's in a small cabinet, in a darkened corner of the bottom end of the cathedral, but I stumbled upon it and thought it was beautiful and amazing. Think of the work that's gone into it, and how amazing it is that it's lasted all these hundreds of years.

The other Cathedral we went to was Bath Abbey. Bath is another beautiful city, though it has perhaps a bit more elegance and grandeur in it's whole demeanour than Wells. The Abbey isn't as awe-inspiring from the outside as Wells Cathedral is, but it's still very fine and far from small ... 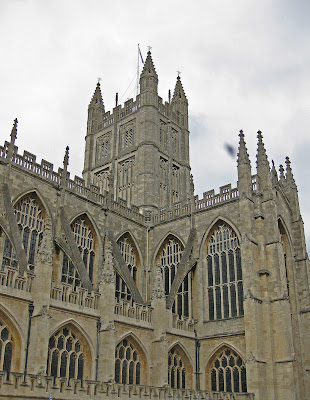 And here are some photos of the interior ... 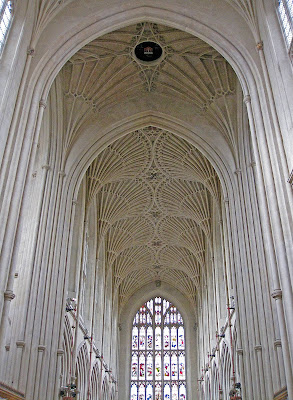 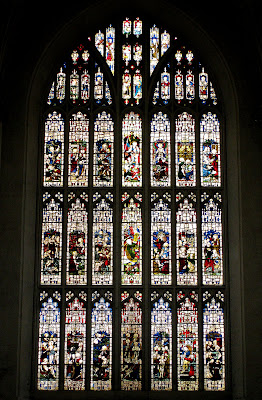 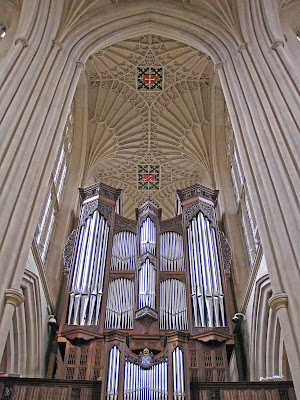 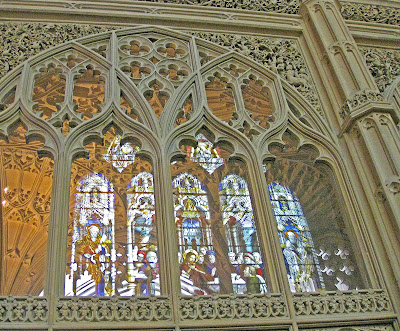