Oh, it's so long since I posted, but given all that was going on at the time of my last post, perhaps you understand some of why I haven't blogged.

As you have probably guessed (or perhaps hoped), I have been discharged from hospital since I last posted.  I had a long admission with a very, very slow weaning of the aminophylline, which went smoothly, but given the upset of my father's death shortly after I was moved from ITU to the ward, we all wanted to be sure that my lungs were going to cope with the reduction in IV and its replacement with the tablets.

Asthma is most definitely a physical illness, but like many illnesses, it can be affected by emotional upset and distress.  This doesn't mean that it's psychosomatic or 'all in the mind', just that physical and emotional well-being is intertwined, and asthma can become worse with both repressed emotion or expressed emotion.  Laughing or crying can both induce an asthma attack in some, including me, which seems most unfair.  When I was in hospital this last time, and out of ITU, I was trying to recover from a terrible asthma attack whilst also trying to find a way to grieve for my father without undoing the healing that my lungs had thus far done.  One of the junior doctors came to see me one weekend evening, still doing her ward round.  I poured out some of my upset that most of the time I was trapped with on my own, and as I forced back some of the tears she said, 'There's no harm in crying and letting some of it out.'  I replied that I wanted to and needed to, but the harm might be that it could set off the asthma again.  She held my hand, which was enough to tell me that she understood that dilemma and that fear, but didn't have the words to make it right.  I'm glad that she didn't try to make it right.  Through a series of comments and observations on both our parts I established that she was a Christian, and I asked if she would pray for me.  She told me that as a doctor she has to be careful about not imposing her beliefs on others, but as I had asked then of course she would pray, and she did.  This lovely young doctor sat with me in my hospital room, with my upset and distress very much on show, and prayed, and it was exactly the right 'medicine' for me that evening.

After my week in the Intensive Care Unit at RVI, I had another three weeks on the ward at the Freeman Hospital.  It was a difficult discharge, not so much because of the asthma, but because I felt like I'd had everything knocked out of me - physically and emotionally.  The one thing I was holding on for was cuddles with Isobel Artemis, my gorgeous kitten.  I had actually seen her once during my admission when a collaboration between my friend J, who was looking after Isobel, and N, the hospital chaplain, meant that J was able to bring Isobel to the hospital chapel (with the permission of Infection Control), and N was able to trundle me down there from the ward in a wheelchair. 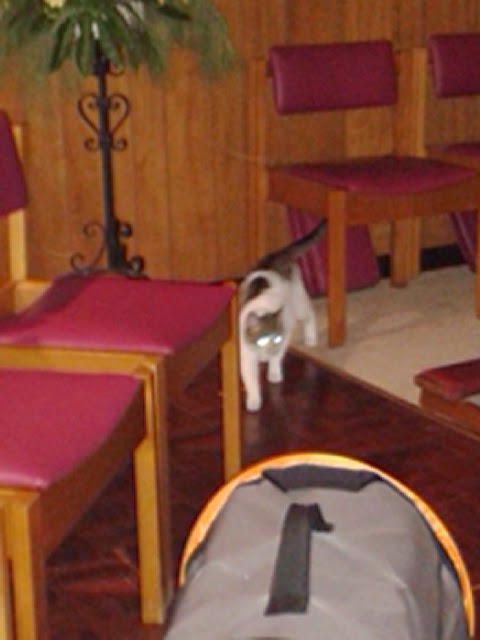 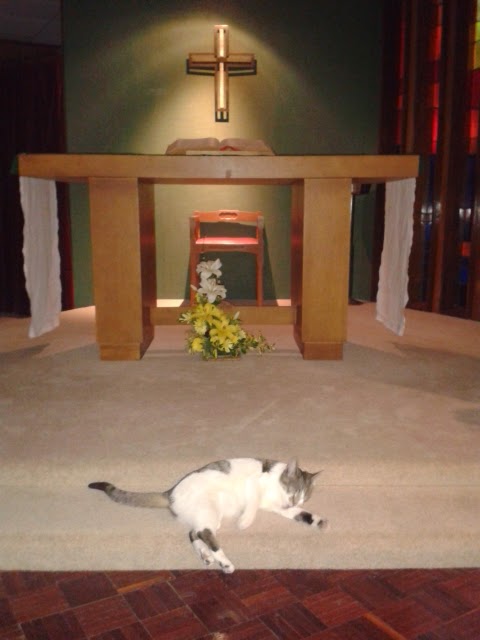 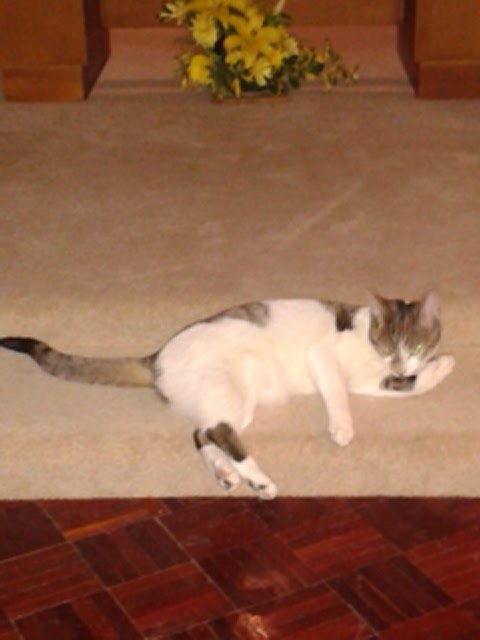 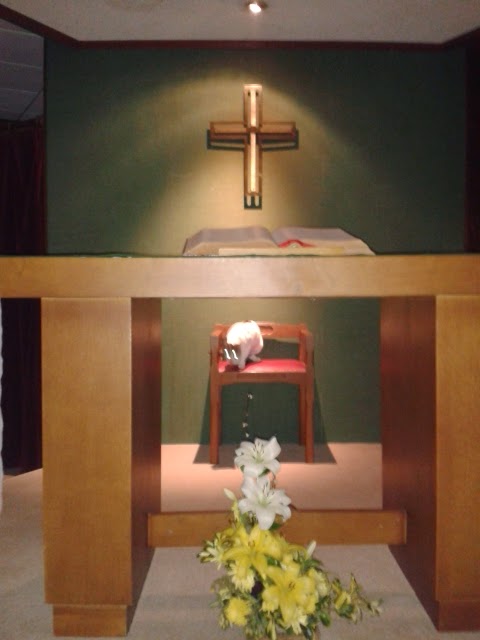 I was so looking forward to seeing Isobel Artemis again and giving her masses of cuddles because I'd missed her so much ... but when I got home she wasn't there.  J said that Isobel hadn't been at home when she'd come in to feed her that morning, but we waited in hope that Isobel would return.  Isobel hasn't come home.  She's still missing almost eight weeks later.  I have been so lost without her and every day I wish she would saunter in through the cat flap as though she doesn't know what all the fuss has been about, but every day there is nothing.  I have registered her as missing with the microchip company so that we will be reunited if/when she's taken to a vets or shelter that scans for microchips.  I have registered her as missing with the company Animal Search UK who have put her details on her website and Facebook page.  They've also produced this poster. 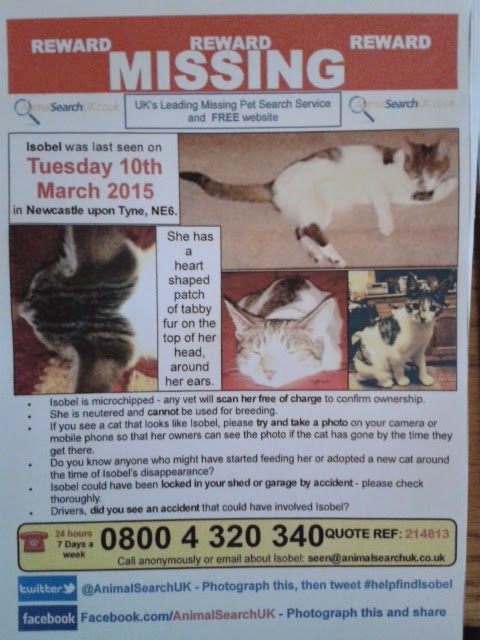 I've put up forty five of these all around the area, plus dropped about 2000 similar flyers through letterboxes in the area.  I've been out calling her at all different times of day (and night).  I've emptied the vacuum cleaner out in the back yard and tied a piece of my clothing to the back fence as both these things carry my and her scent so are meant to attract her home if she's anywhere nearby.  I've contacted the dog and cat shelter, and put her details on every appropriate Facebook page that covers the area.  I've contacted several vets practices in the area.  I've had a few calls from Animal Search UK with possible sightings that I've followed up immediately, but they've turned out to be other cats or nothing at all.  Nothing.  It's like she's just vanished.  The vet receptionists think that, given all that I've done to try to find her and there's been so little response, she's most likely been stolen.  I can only hope that she is eventually scanned for a microchip and discovered to be missing from me.  I long to have her home.

I will never give up on getting my precious Isobel Artemis home unless I get a call to say that she's been found dead, but I'm not good at having no cat in my life.  I'm going to get another kitten.  J has a grown up nephew who has cat who had kittens thirteen days ago.  I would like another little girl kitten if possible, and in a couple of weeks J's nephew and I are going to take the four kittens in Daisy cat's litter to the vet to be sexed.  One of the kittens is a little calico so is almost certainly female, the other three are tabbies like Daisy, and I'm kind of hoping that one of them is female too as I think I'd quite like a tabby.  Anyway, I went to meet all four of them when they were just two days old. 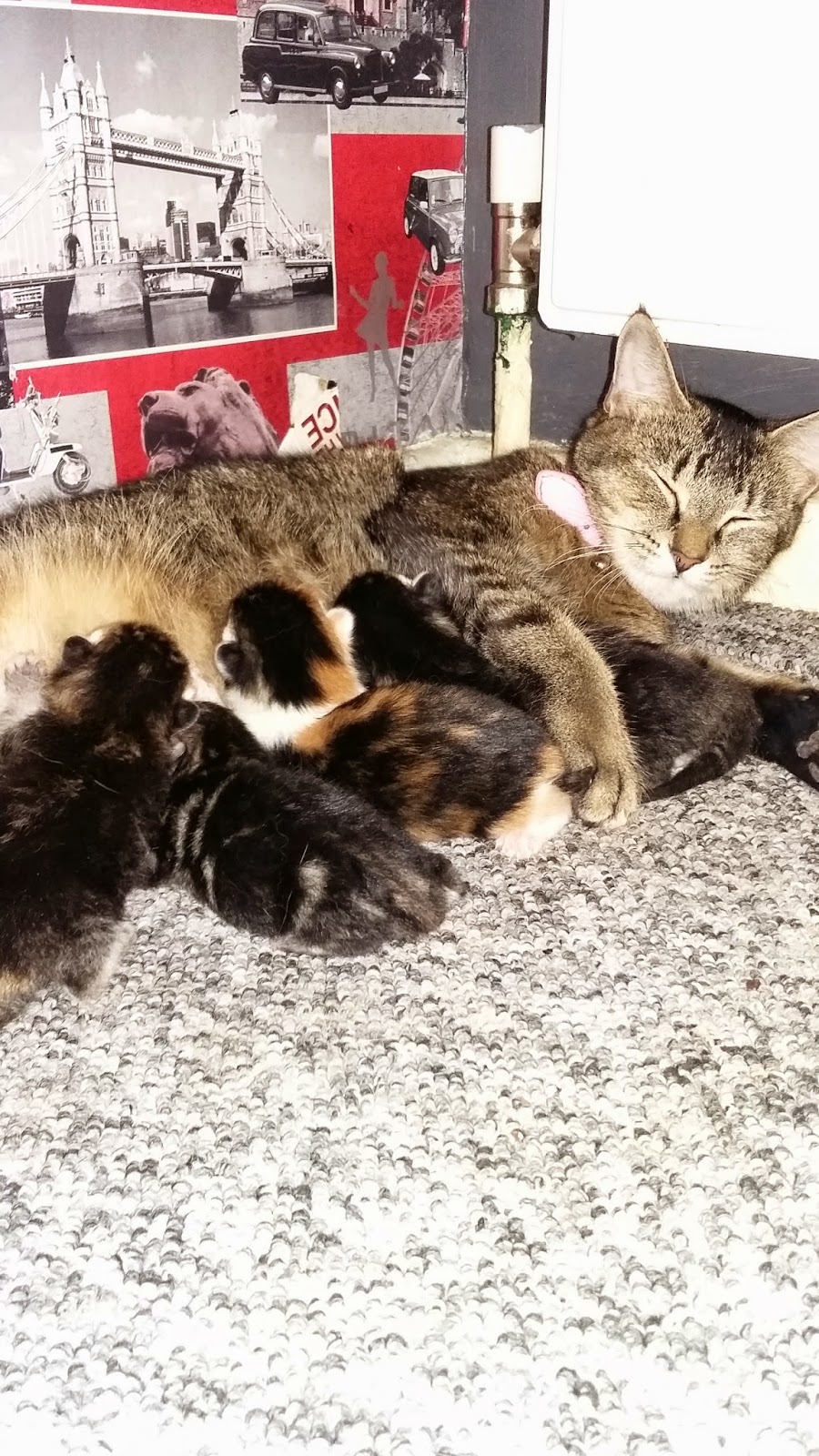 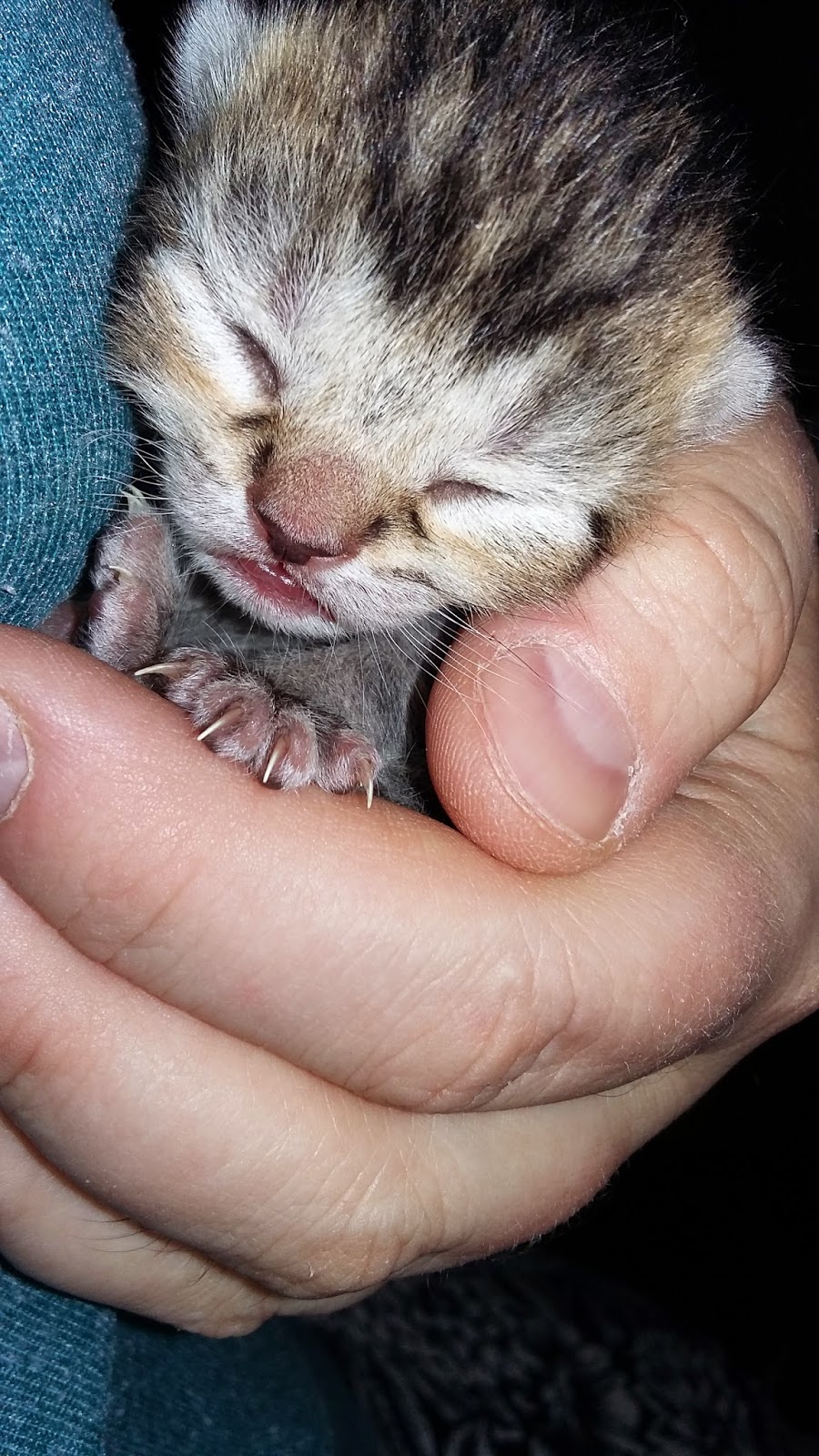 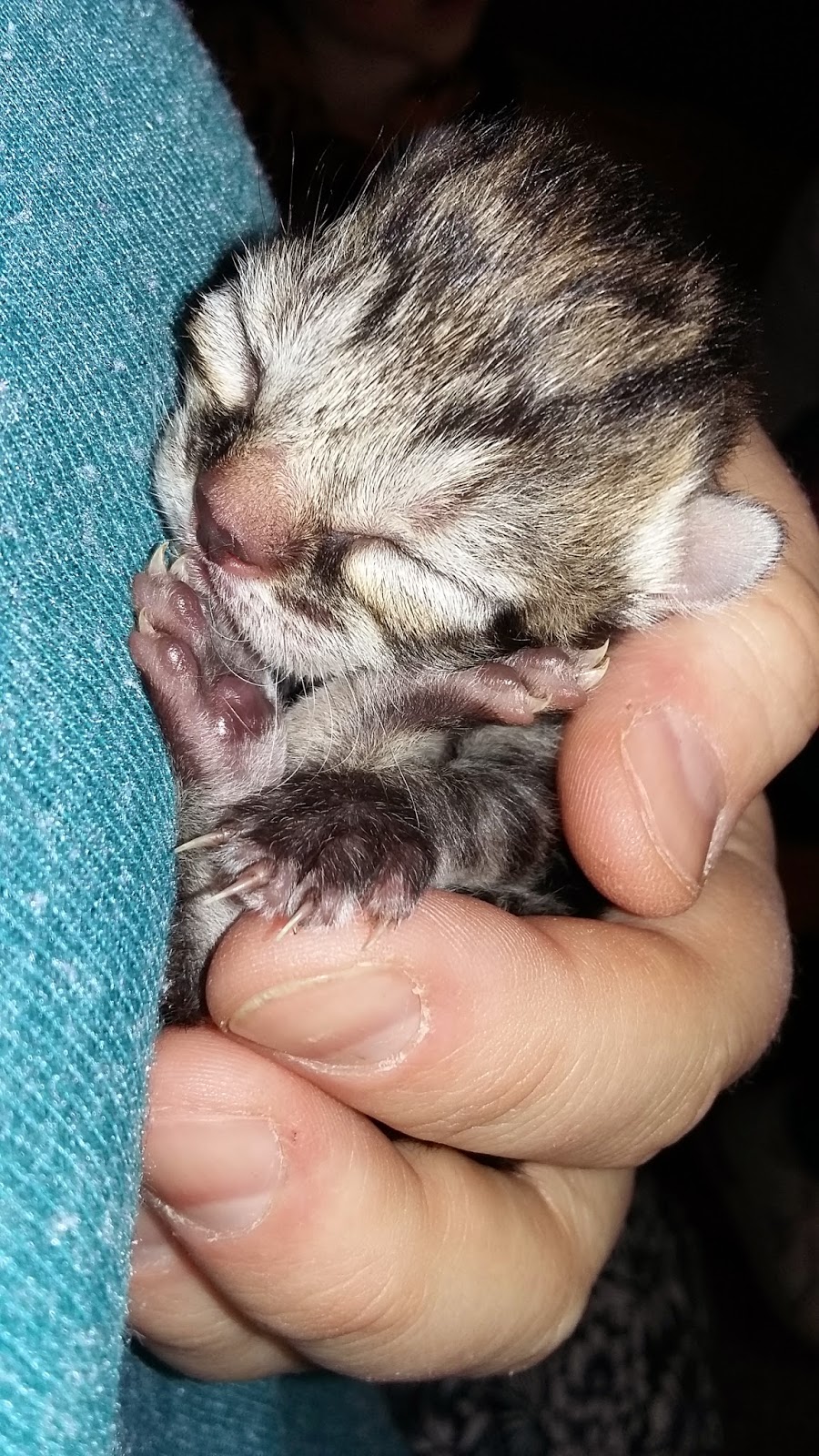 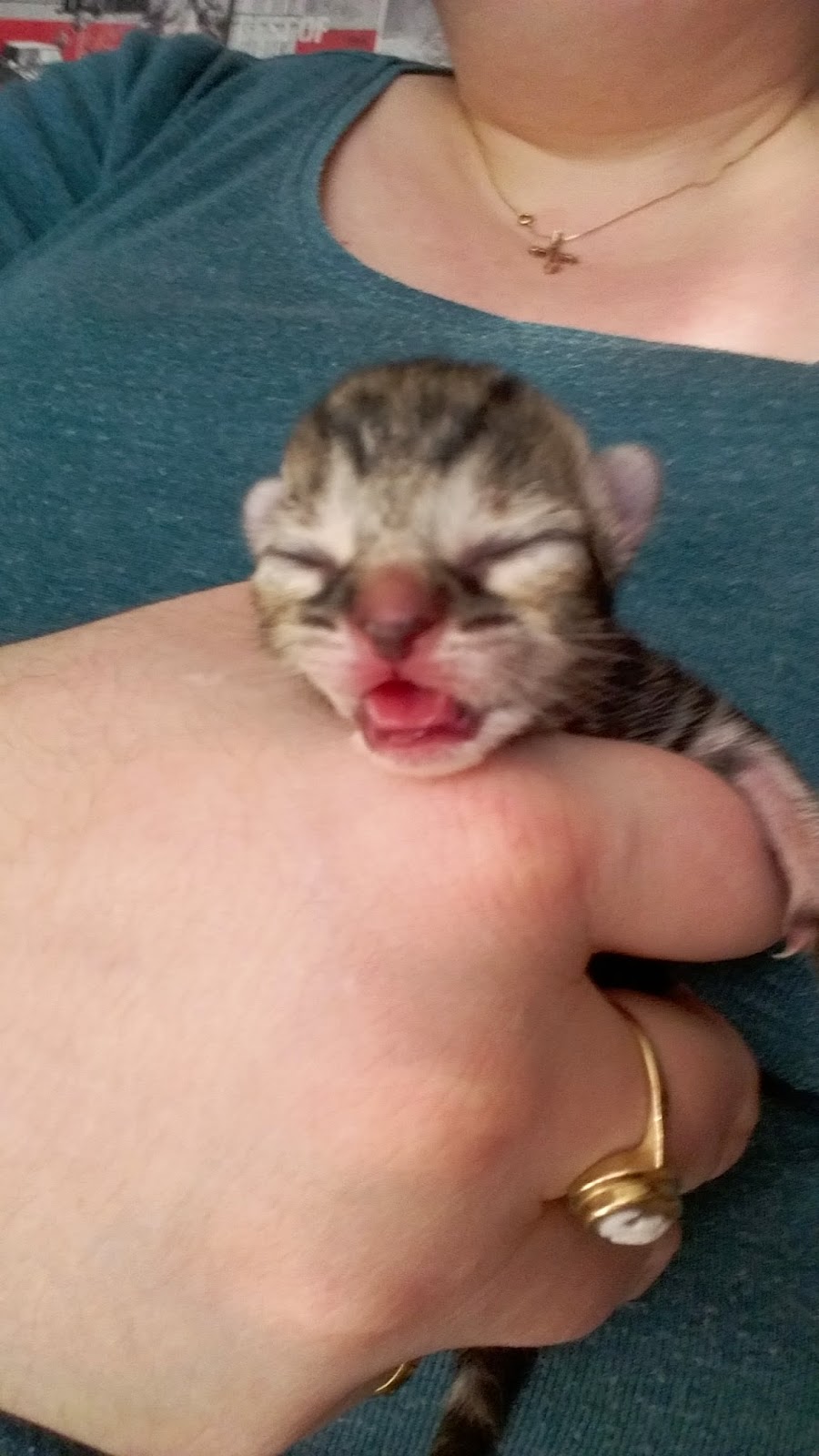 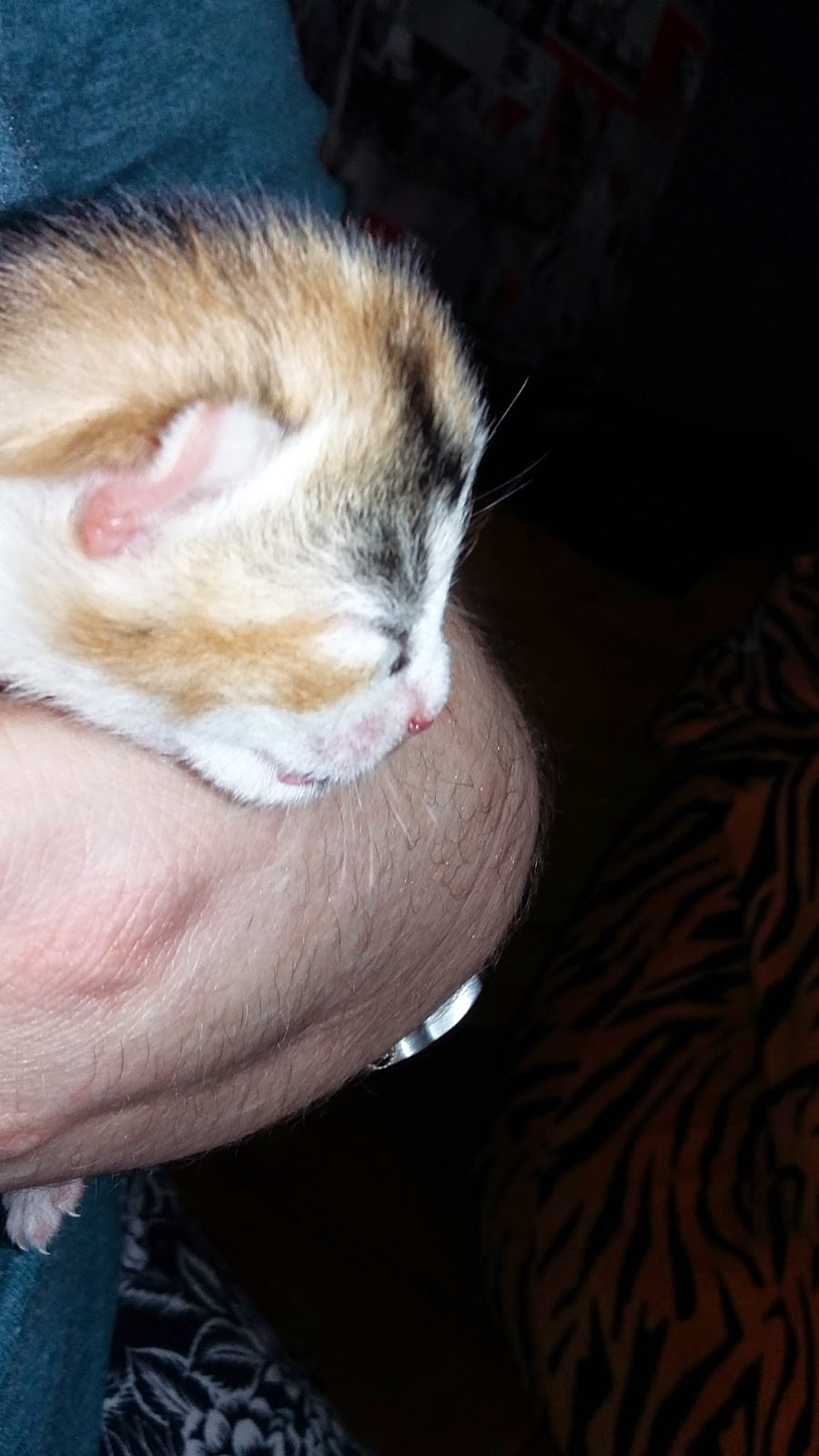 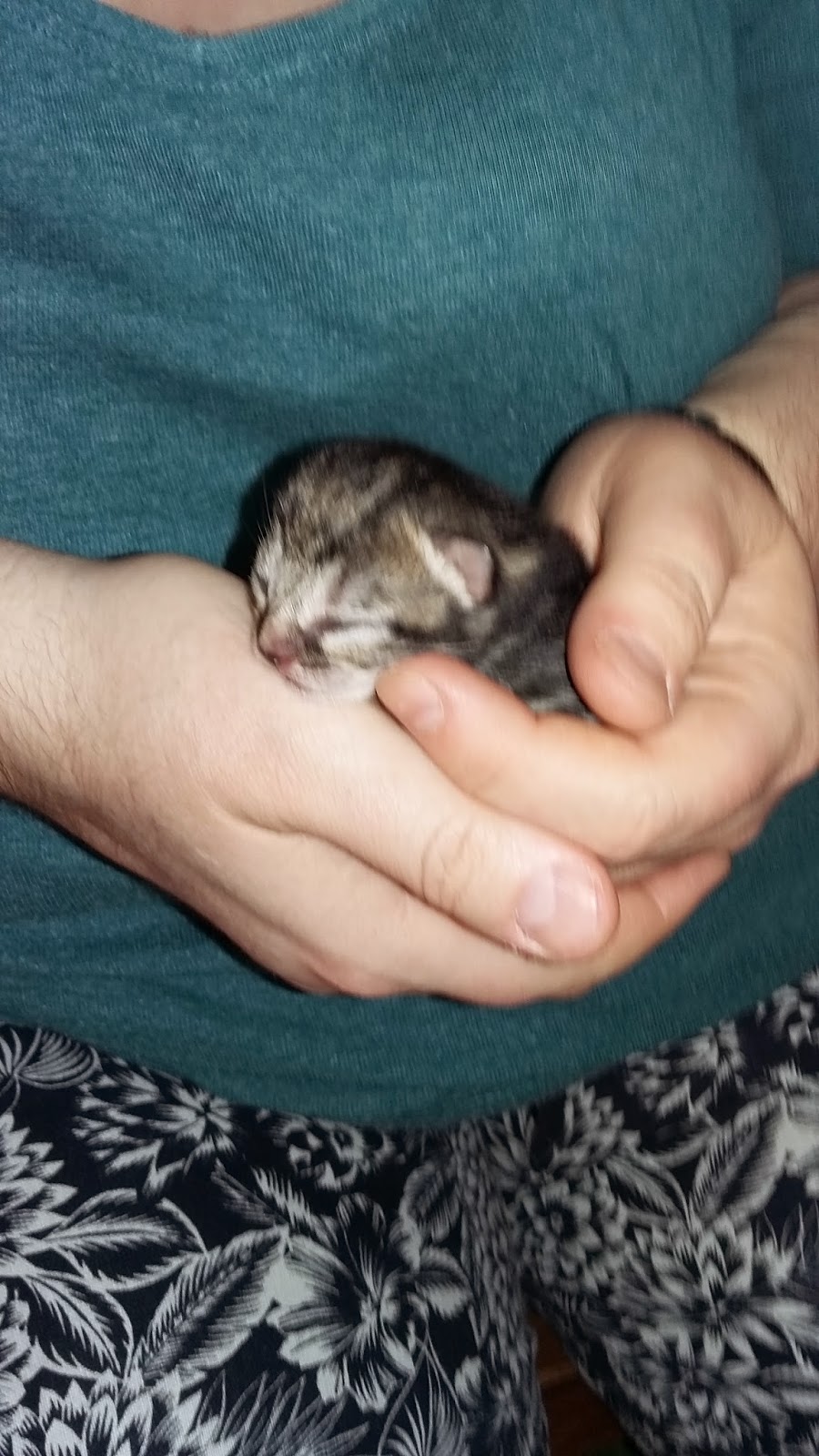 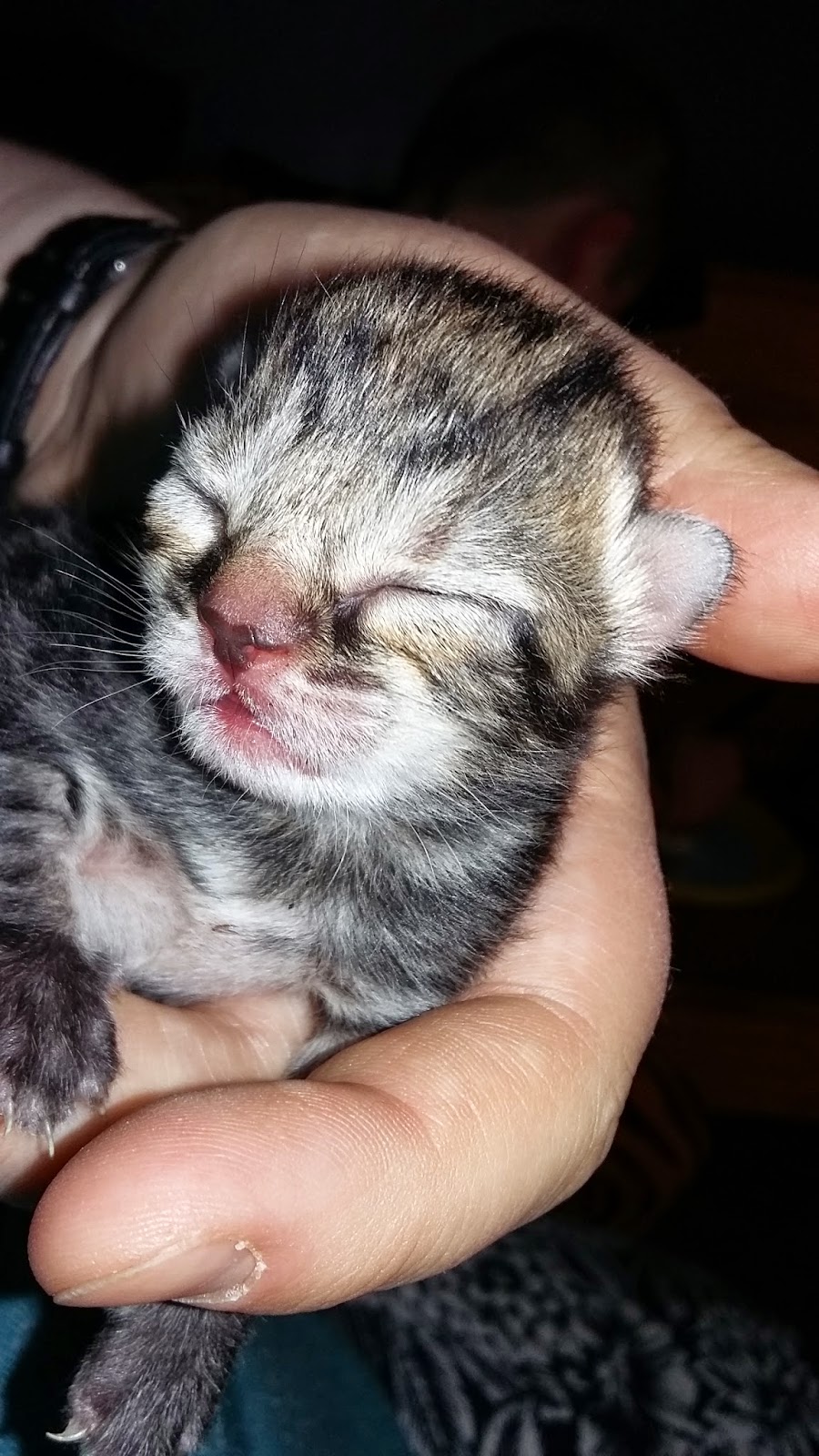 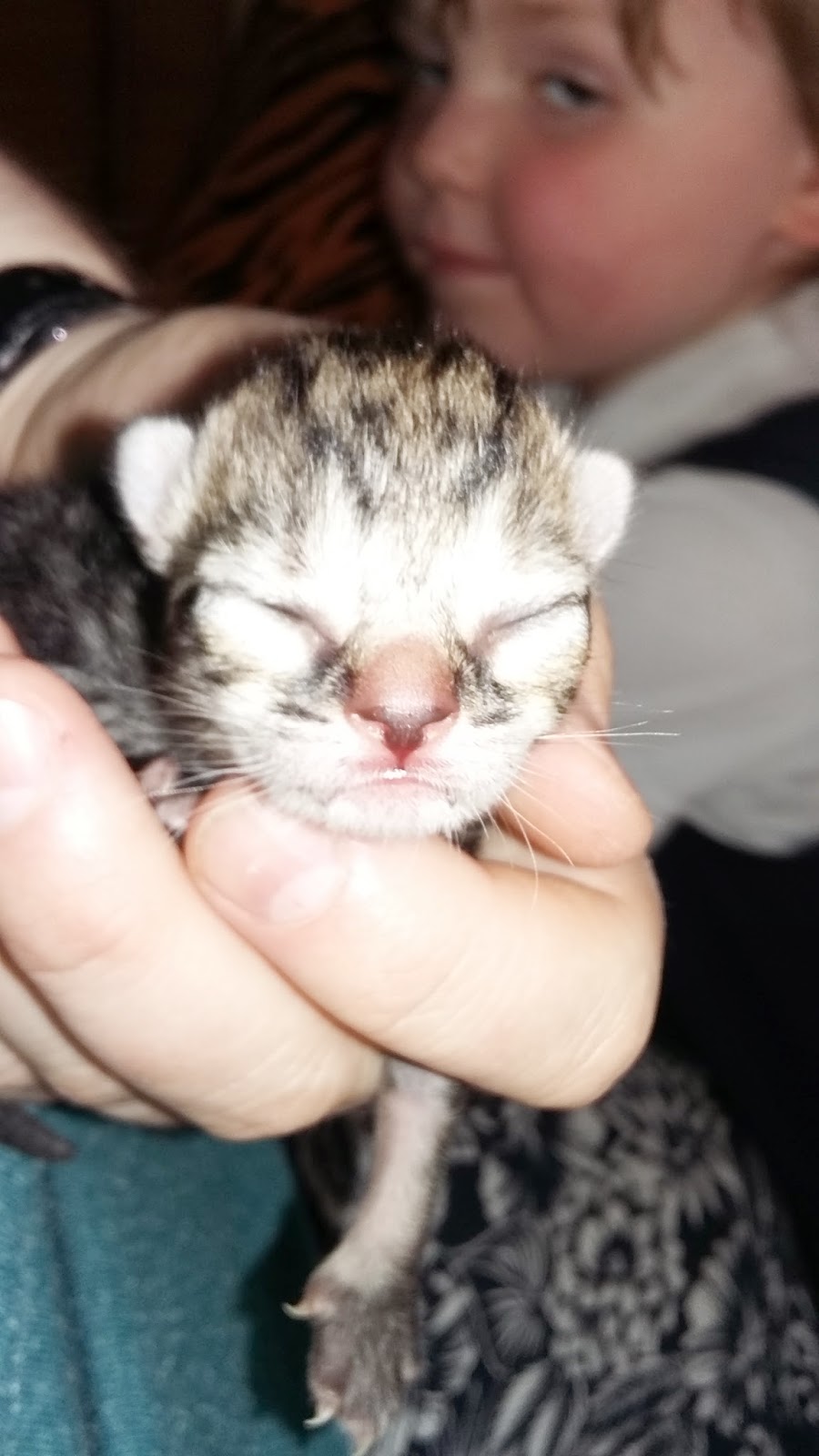 I can't tell from the photos which is which, but I do know that all four of them appear in these photos.  Let me know if you can tell the difference between them.  They'll be much easier to tell apart the next time I see them at four weeks old, and I'll hopefully be able to see more of their personalities too.

So, the other departure, the one I've been avoiding saying much about.  Dad.  We had to wait a month after Dad had died until we could have his funeral, in part because of a backlog at the crematorium.  It was a difficult day, and actually I don't want to say very much about it ... Although I will say that after the funeral and the wake I had a really good family time with my mum, step-dad, my brother M and his family, and my brother C and his family.  M and family were staying in an apartment hotel (a hotel comprised of little apartments, with self-catering facilities as well as food/drink that can be ordered and brought to the apartments) that we all congregated at both between the crematorium and wake and after the wake.  The children were able to run around inside and play together, which they all needed as there isn't much scope for that at a funeral.  The rest of us sat and chatted, and remembered Dad, and then we ate and talked about 'normal' things too - things that weren't about death and dying, or the people we've struggled with through the whole process, or the difficult aspects of Dad that were ignored in the wake remembrances.  We enjoyed being together and being a family, and you know, since then we've perhaps had more contact with each other than we had before.  Maybe it won't last, but at the moment it is good, and that is the positive that's come out of Dad's death.
Posted by BeckyG at 21:37 1 comment: