Getting back to it

Well hello there, folks!  Even the most unobservant of you will have noticed that it's a very long time indeed since I last posted, but now it's time that I got back to it, back to you.

It's been a difficult five months or so since my last blog post with two bouts of pneumonia (I told you there was no such thing as a simple cold for a severe asthmatic!); time in hospital; the death of a very long-standing and dear friend; the death of my beloved cat, Zach, who had been my loving (although crazy and psychotic) companion since he was four or five weeks old almost seventeen years ago; the diagnosis of Impaired Glucose Tolerance (IGT), or pre-diabetes, with a major contributory factor being the long-term high-dose oral steroids I take for my lungs; and still working through some of the stresses of last year, both in my own time and with my psychologist.

Is it any wonder I've needed a bit of space from writing about it all on my blog?

However, despite all of that there have been some good times and some good things in the last few months too.  In recent weeks, one of the things that has helped to bring back my smile has been my new little kitten, Isobel Artemis.  This photo was taken when she was just three to four weeks old and I went to meet her for the first time. 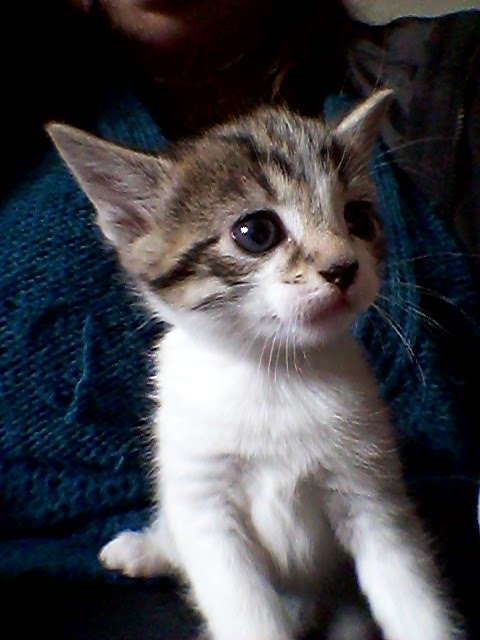 Isobel came to live with me on the day that she turned eight weeks old, and this photo is from her first evening with me. 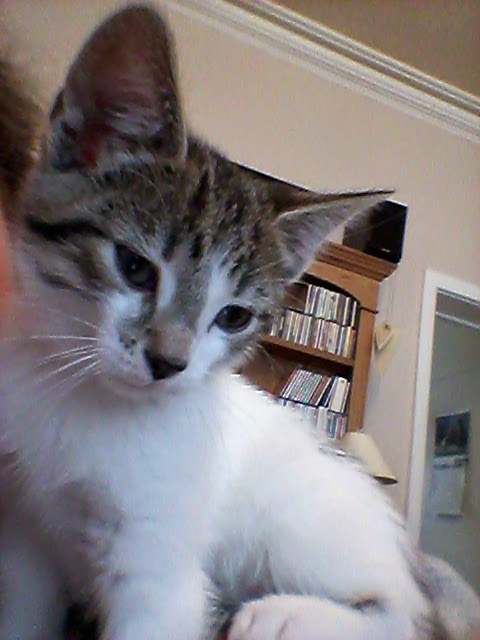 As you can see, she'd grown a bit, but she was still so small (especially in comparison to the size my lovely Zach boy had been) that I kept looking at her and thinking, 'You're so small, you can't be real!'  She was quite unsure of her new surroundings for a couple of days, although she seemed to feel safe enough, judging by how relaxed she was first thing in the morning of her first full day... 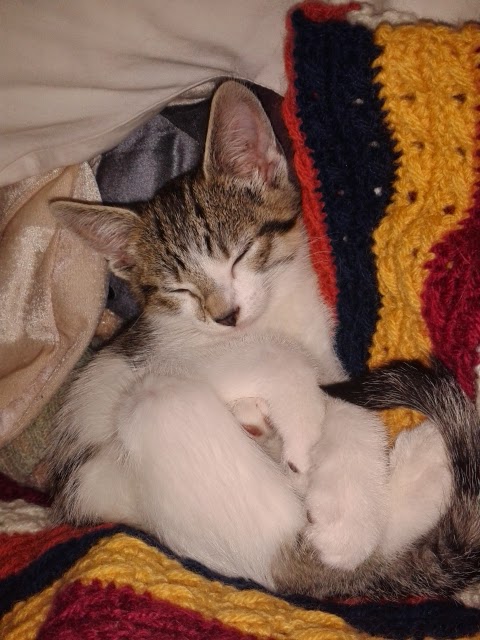 She's now completely settled in, a complete delight, and totally nuts :o)  Her mother was half Bengal, which of course makes Isobel a quarter Bengal.  She has some of the traits, particularly being talkative with a variety of little chirrups as well as the more conventional meows and purrs; and she has just a couple of the Bengal spots on her side; but I wasn't sure how many of the other traits she'd have.  One thing Bengal cats are known for is a liking of water, and yesterday Isobel had her first encounter with water.  It was the middle of the afternoon and she decided it was cuddle time, which is lovely and usually not a problem, except that I happened to be in the bath at the time!  Despite having her feet already immersed in the bath water, she walked along my legs into deeper water (my legs were at a slight angle due to the bath lift I use), patted it with her paw as if gently attacking it, walked back up my legs, looked at me quizzically, leapt out of the bath, ran around the flat in crazy mode, scurried back into the bathroom, leapt back into the bath, missed her footing on me and got absolutely drenched.  She ended up very spiky, utterly bemused, extremely soggy, and yet wanting more.  I don't really want to end up sharing all my baths with the cat from now on - that would be weird! - but it was very amusing, and I have to say that she's incredibly silky soft today.

I could probably post photos of Isobel ad infinitum, but I'll restrain myself (for now) and tell you some more of the better things that have been going on for me in recent times.

So, at the end of April my mum turned seventy, shortly followed by my step-dad at the beginning of this month, so between the two birthdays we had a family week away in celebration.  Mum, J (step-dad), my brother M, his wife, N, and their children, O and D, and my brother C, his wife, S, and their son, J, hired a 'cottage' in Shropshire.  The 'cottage' was in the grounds of a manor house with several other 'cottages' (mostly far too big to be called cottages), and amongst other things a huge building that contained a large games room and banqueting hall.  We'd arrived on the Friday, and on the Sunday we had a big party for Mum and J in the banqueting hall with various other factions of the family coming to join us for the day.  Most of the folk who came to the party were from J's side of the family, and it was great to have a chance to meet some of them for the first time, some for the first time since Mum and J got married over twenty years ago, and to chat to others who I have seen more recently but haven't had the opportunity for a good catch-up.

There are always some tensions when families get together for prolonged periods, but on the whole I don't think we did too badly, and I did have a good time.  There were times when I felt a bit 'spare part-ish' and lonely, because I was the only one who didn't have someone else, and a couple of days when I ended up spending much of the day on my own while others went off in their family groups, but I tried to make the most of it, and did have some good times.  I also had some very enjoyable times with my brothers and their families during trips out, and I really valued the time to get to know my youngest nephew, J, a bit better.  I don't get to see him very much, so even at age three, he didn't really know who I was, but by the end of the week he was inviting me to his next birthday party ... in February next year.  I do hope I get to see him (and his parents, of course!) rather more now and we can have the kind of aunty-nephew relationship I have with O and D.

What else has been good?  Well, I've been learning to crochet.  In my review of the year at the end of last year, and I think also at the end of the previous year, I said that I wanted to learn to crochet.  I sort of learnt a little bit in 2012, but not at all confidently, and I couldn't do it with any accuracy without having someone who knew what they were doing to guide me.  Earlier this year my friend R was off work for a few weeks.  Early on in her recovery from the surgery she had I went to visit her and happened to mention that I wanted to learn to crochet, and much to my delight she said that she did to and we set up a plan to learn together.  I'd bought a book (A Little Course in Crochet) a few weeks before in anticipation of teaching myself and we decided to use it as our tutor.  We met up frequently during R's recuperation, working methodically through the book, and practising on our own between times.  We still haven't reached the end of the book, and R is now back at work, but I feel like I can call myself a crocheter.  I can actually make things, things with straight edges where they're meant to be straight, and with corners where there are meant to be corners.  I've made all sorts of things, albeit mainly those in the book, but that's the beauty of the book, because it teaches you a skill and then gives you a project to make using the skill it's just taught.  R and I don't meet now like we did, but I'm still crocheting, I think she is too, and we certainly plan to get together for more creative crocheting times.  It's so relaxing, and actually it really helped me after Zach died.

So having heard what has been, I guess I should say a little about what is.  Right at the moment my priority is trying to keep breathing.  The weather has been lovely recently with lots of sunshine, but the air has been thick with humidity - around 60% to 75% according to the Met Office - and that's been causing me problems.  That and the high pollen count.  As much as I love going out in the sunshine - and I really need to get the vitamin D given my osteomalacia - I've had to spend a fair amount of this lovely weather indoors, breathing the clearer air produced by the ventilation system in my flat.  Even then I've had some very troublesome days and nights with my breathing, and have generally been quite exhausted.  I've put my steroids back up from 45mg to 60mg, and have been having extra nebs, but I'm also thankfully due to see my asthma consultant on Thursday.  I don't expect him to have any magic answers or even the glimpse of any new treatment, but at least he'll know where things are up to.

To be honest, it hasn't been too much of a hardship having to be inside at home.  Sure, I'd love to be outside enjoying the sun and the warmth, but I've also spent lots of time with Isobel and have been taking great delight in her.  We've played a lot, had lots of cuddles, and she's been learning the word no when she's looked up at the curtains with rather too much interest ;o)

I think that I'd better sign off for now as it's getting late, but I'll be back a whole lot sooner than I was last time.
Posted by BeckyG at 00:21 4 comments: