Let me start with another apology for again neglecting my blog. For the most part I've been enjoying having a break from studies so busy doing fun stuff :o) I've also been getting the paperwork sorted for my holiday to France in 10 days time :oD I'm very excited and have all my medical stuff translated into French now, thanks to a rather wonderful OU peer who read my blog, lives in France and offered her services of translation for my paperwork and if I have any medical problems while I'm out there. She's a marvel. 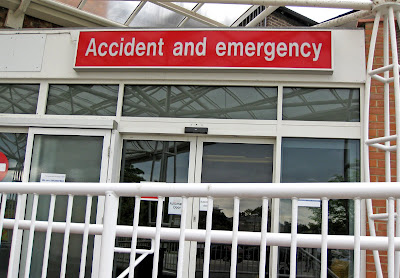 Today I'm okay, but still very tired and still have that post-poisoned feeling so I've done very, very little, which is rather boring and very frustrating.

Even though things turned out okay in the end, yesterday really wasn't the day I'd had planned.

bloomin' nora! glad you're ok. you can't miss saturday after you organised it! :)

That sounds like quite an adventure! Glad you're okay though, out of interest are you a type one or type two BA? I'm type one and although have several allergies that land me in hospital, have never been given an epi pen...

jeeze woman! That was an adventure! Well done on escaping a and e! Hope your feeling much better very soon. Big hugs lv rattles Xxxx

Nothing's easy is it! Glad you're okay. Btw, Green People do a mint-free mouth wash (although it may have many other things you're allergic to in it!), it's fennel flavoured.

Thank you all for your comments and well wishes. I was wiped out for a few days after the reaction, but that's normal for me, and I've been back to my usual self this week. I have the rather unsettling thing of having return to the dentists tomorrow, so I'm hoping that there aren't any similar occurances.

Anon, thanks for the info about the Green People mouth wash. I can use their fennel toothpaste, but I haven't yet checked their mouth washes. I'll have to check for colouring and also things like sulphates and benzoates, but I'll have a look at it.

Joey, in answer to your question, I'm an awkward sod (in case you hadn't already realised) and I'm both types 1 and 2 brittla astma - I have the everyday chronic symptoms, and the suddenly catastrophic attacks. I'm good at being different ;oP

I gave you an award hon - i loveading your blog - its witty and i love hearing about the wandering holey watering can and its guardian lol!!!

Check it out on my blog.

I am yet another brittle asthmatic who has many a weird and wonderful allergy. Some the consultant himself didnt believe till he saw them first hand.
I hope you are doing ok right now.
Me, I am just in post admission phase, trying to recover but not getting very far.
Take care and keep blogging.