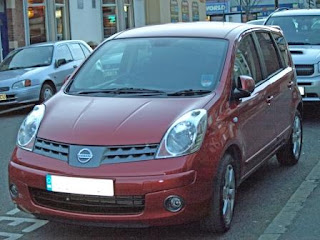 You may remember a couple of weeks ago that I was very excited at having 'bought' a new car on the motability scheme. Well here he is. It's not the best photo in the world as it was already getting dark when I took it, so I may post a better picture when I get around to taking one. However, I wanted to share with you what my new car looks like. It is a dream to drive - really smooth, quiet when running, the seating is quite high for a small(ish) car, so visibility is good, and I'm loving all the gadgets it has. It has so many fancy gadgets that I wouldn't be surprised if it had world domination potential ;oP
After a huge amount of deliberation I eventually decided upon the name of Tommy Crotchet for the car. I'm a firm believer that cars should have names, after all, ships and sailing dinghies are given names automatically. The plan is that, if Tommy Crotchet's name is to be shortened at any time, which I'm sure it will, he'll be called Crotchet, rather than Tommy, seeing as he's a Nissan NOTE.
I've had great fun driving around over the past couple of days, and I'm very much enjoying have a significantly bigger engine than my previous car (Wellington) had. Wellington had a 1 litre engine, where as Crotchet has a 1.6L engine. The acceleration is so much better, which feels so much safer turning right on big roundabouts on busy roads, as Wellington could never get good enough acceleration on these occasions, and I'd often get beeped at when I'd pulled off the roundabout into the right hand lane. Anyway, enough of that. All in all, I'm just loving it!